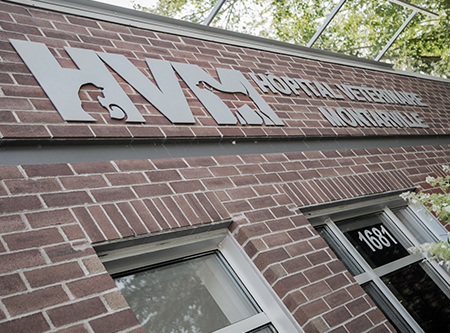 The Montarville Veterinary Hospital is run by Benoit Couture and Isabelle Marois, both veterinarians with a passion for animals, medicine and people.

It was founded in 1977 by veterinarians Francis Landry and Jacques Dupré at 1649 rue Montarville. The property belonged to doctor Donat Fournier and is now the site of the Caisse populaire Desjardins du Mont-Saint-Bruno. The two veterinarians quickly purchased land at 11 boulevard Seigneurial and built a new building, which they moved to in 1978.

Benoit Couture began working there part-time in 1986, during his studies at the Université de Montréal’s Faculty of Veterinary Medicine, and returned after receiving his diploma in 1988. After Dr. Dupré’s departure in 1996, he became partner with Dr. Landry, then became the sole proprietor of the hospital in 1998. Isabelle Marois, owner of the Sainte-Julie Veterinary Clinic, joined the hospital as partner in 2015.

Determined to provide their clients with exceptional service, the owners assembled a team that was skilled and attentive, with an innate sense of compassion and respect. Honesty, transparency and listening are core values at our hospital, and clients can tell!

The hospital’s reputation grew, and over the years the team grew from 2 to 15  employees. A wide range of professionals joined the team: veterinarians, animal health technicians, animal attendants, receptionists and students in veterinary medicine and animal health care. Initial services expanded to include grooming, ultrasounds and laser surgery.

In 2008, the hospital moved to its current location at 1681 rue Montarville. Today, the hospital serves clients from both the Saint-Bruno-de-Montarville region and elsewhere.

Active in the community

The hospital is also active in its community, supporting various social organizations, including schools and local cultural businesses. It also helps promote the veterinary profession through mentorship, training and interactions with students and interns.

A proud protector of the environment, the hospital works each day to reduce its ecological footprint, helping make its community a better place to live.

Caring with love and expertise